Silver asparagus tongs, pickle forks, jelly servers, bonbon scoops, potato chip spoons? A 19th century aversion to touching food with the hands fostered the imaginative invention of task specific silver cutlery. (This antipathy is something I can personally relate to as I consider one of the perks of living in Europe the common acceptance of eating pizza with a knife and fork.)

Popular manuals like Charles Pierce’s The Household Manager (1857) or Manners and Tone of Good Society,  ghostwritten by ‘A Member of the Aristocracy’ (1890) dictated an evolution in cutlery etiquette. The historical custom of  ‘one fork per family’ (I’m not kidding) grew into the possibility of 180-piece individual table settings. On both sides of the Atlantic, one began to see the tables of the newly rich filled with items like cucumber servers, sardine spades and fried chicken tongs. In the States, there was such an excess of silver production that in 1925, Secretary of Commerce Herbert Hoover created a decree (which stands today) that an American silver service can only have up to 55 types of silver pieces. In Europe, the number of  silver servers was only limited by the extent of the human imagination.

These esoteric, yet charming, silver pieces often show up at auctions and flea markets eliciting the usual, “What on earth does one do with this”? Granted, there is not a lot of demand these days for ‘cake breakers’, ‘marrow scoops’ or ‘sardine forks’ and this is reflected in low auction prices – there are some real bargains out there, especially for silverplate.

One can have a lot of fun with these unique tools. They can still hold their own at the table, even in ways which digress from their original use (i.e. dinner party conversation can be diverted from the incendiary ‘political’ to politely ‘practical’ ruminations on the 19th century; children with food aversions can be coaxed to experiment using the right tool; or innovative 21st century uses can be discovered – like using your asparagus pincers to snare those cocktail franks or your silver toast fork to comb your curls).

Why do asparagus merit their own tools?

In France, the asparagus season is upon us…and in the words of 19th century French writer Marcel Proust in Swann’s Way, ‘…asparagus turns my chamber pot into a flask of perfume.’ Gabriel García Márquez also weighed in on asparagus issue in his Love in the Time of Cholera (1985) with one character relishing ‘the immediate pleasure of smelling a secret garden in his urine that had been purified by lukewarm asparagus.’ Now doesn’t all that olfactory musing put you in the Spring mood?

One cannot underestimate the importance of asparagus in social, literary and artistic culture. In addition to literary reveries on asparagus urine, the vegetable was a source of inspiration for many an artist’s still life. An often told anecdote is the story of Edouard Manet’s painting ‘A Bunch of Asparagus’. It seems that Manet sold this painting to Charles Ephrussi (upon whom Proust’s aforementioned character Swann  is based) for a sum of 800 francs. When Ephrussi mistakenly sent him a thousand francs, Manet, a gentleman of wit and economy, painted a single asparagus and sent it to Ephrussi with the note ‘There was one missing from your bunch.’ Asparagus – the vegetable muse. Is it no wonder they merit specialized servers?

In order to truly appreciate silver asparagus tools, one also has to take into account the European adamance for eating fruits and vegetables ‘in season’. It is not uncommon for a French country family to eat asparagus every single day during a span of three to four weeks. (Having spent the last three weeks near Fargues, France’s ‘asparagus capitol’, I can attest to this.)  Thus, one could consider an investment in specialized serving tools and plates a practical well-amortized expenditure over an intensive period of vegetable use.

Cultivated by the Romans as early as 200 BC, asparagus was a bit out of favour during the Middle Ages. Popularity was revived by Louis XIV, whose passion led him to direct his gardener to develop adapted greenhouses enabling him to enjoy asparagus ‘the food of kings’ year-round. The beloved and elegant asparagus stalk even became a common decorative motif in 18th and 19th c. French furniture.

Thomas Jefferson, after his stint as Minister to France from 1785 to 1789, became an asparagus advocate in his own right, sowing seeds mulched in tobacco in a reserved part of the garden at Monticello. In his journals, Jefferson duly noted joy at the arrival of asparagus season, recording the number of times asparagus was served at his table – 22 times!  Jefferson’s favorite recipe for marinated asparagus was enhanced by the olive oil he had shipped from Bordeaux especially for that purpose.

In late 19th century Britain, asparagus was also considered a great delicacy. In Mrs Beeton’s Book of Household Management, published in 1888, the author gives recipes for boiled asparagus on toast, asparagus and eggs, and asparagus pudding. It has been said that Queen Victoria was an ardent asparagus lover, ‘gobbling up” (as was her fashion) enormous amounts in season. Let us not even consider an ode to her chamber pot!

Thus, it is no surprise that such a revered vegetable merited its own silver cutlery on both sides of the Atlantic.

Individual asparagus pinchers or tongs:  A tool for each individual diner was introduced in the 19th century.  Examples of these ‘silver tongs’ were even displayed as part of Prince Albert’s Crystal Palace Great Exposition in 1851.

Individual Plates: The 19th century also saw the arrival of individual asparagus plates with an insert to hold a sauce (asparagus is not to be served alone).

Highly decorated individual asparagus shells were popular in 18th century England. When placed together, these shells formed a circle with each component holding a small bunch of asparagus together for easy handling. (I have one friend who has turned her inherited set into individual pizza slice servers.)

…while we are at it, how about glancing at a few other esoteric silver servers?

Digressing from the asparagus at hand, the 18th and 19th century penchant for silver serving tools also brought us the:

Tomato server: – These large servers with a flat surface perfect for elaborate engraving or piercing were often the most ornate piece in a service. They were used to lift individual tomato slices while allowing excess juice to drain.

Cake Breaker: – Resembling an afro comb with long tines, the breaker was designed to make clean slices in popular 19th c. cakes like angel food or the ‘Lady Baltimore’. 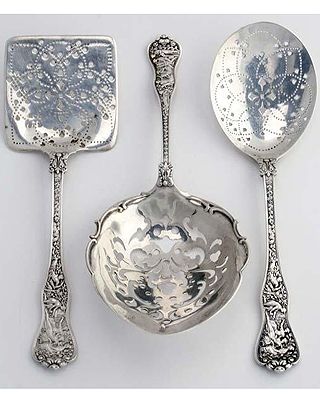 Saratoga chips server: – The first potato chips were created accidentally during the late 19th century in Moon’s Lake House in Saratoga Springs, New York, by a chef trying to appease a customer unhappy with his thick and soggy potatoes. Out of frustration, the chef cut the potatoes wafer thin and fried them. Although they shattered when touched with a fork, the client loved them and the potato chip was born.

The potato chip server was an imaginative response to the aforementioned aversion of touching food with the hands. American silver companies like Tiffany, Gorham and Reed and Barton invented the Saratoga Chip Server. Although I have never found one of these on the continent, I did come across one a few years back in a flea market in New Hope, Pennsylvania. During that trip, I also came across some sterling silver corn-on-the-cob picks which join my ever lengthy ‘wish I had bought’ list. 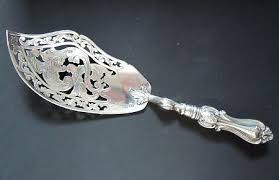 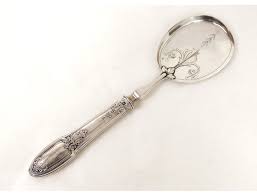 Ice cream slicer: – Prior to the invention of the ice cream scoop, ice cream was served on both sides of the Atlantic by slicing with this large flat knife.

Lemon fork: – You can still find these in use in restaurants. A small fork with three splayed tines used to extract the juice from a lemon wedge.

Bonbon scoop: – The bonbon scoop was introduced by the American company Gorham in 1897. With the rise in chocolate manufacturing during the late 1800s, the small scoop spoon allowed for the neat serving of bonbons, nuts, mints and chocolates without messy fingers.

Toast serving fork: – Large three tined fork, perfect for those of you wary of others who touch your toast.

Piccalilli spoon or continental hors d’oeuvres set:  – In the US, the small pierced piccalilli scoop was designed to serve a popular tomato relish. In Europe, a set of three or four pieces were grouped together for serving appetizers.

Marrow spoons or scoops: Narrow utensils used to extract bone marrow. You can see Martha Stewart’s Youtube  to see her give it a go with some 18th century silver marrow scoops.

Sardine Servers: For the meticulous scooping up of the little critters.